Cholula Mae got her feet trimmed on Saturday. She has SUCH lovely feet. I’ve been trimming her for 3ish years, now, and while I’m competent and her feet greatly improved when I started the natural trimming, I’m still not super confident with the whole process. It takes me forever and I was always questioning my work.

But! I found a great trimmer here. Initially I just wanted her to come out, check Cho’s feet, give me some tips, let me know how I was doing. Overall? She said I did a really good job, but she was able to work on the flares a little more, trim some of the sole (that was flaking off anyway, the only sole that needs to be trimmed!), etc.

Because she was fantastic and made Cho’s feet better, I decided to have her continue trimming her. Also? Apparently their feet get HARD here in the summer. I bought a stupid tiny nippers that were already difficult to use. And summer? You think I’m going to do that in 105? Nope.

I tried to take some conformation shots on Sunday, because Cho is
a) really shiny right now 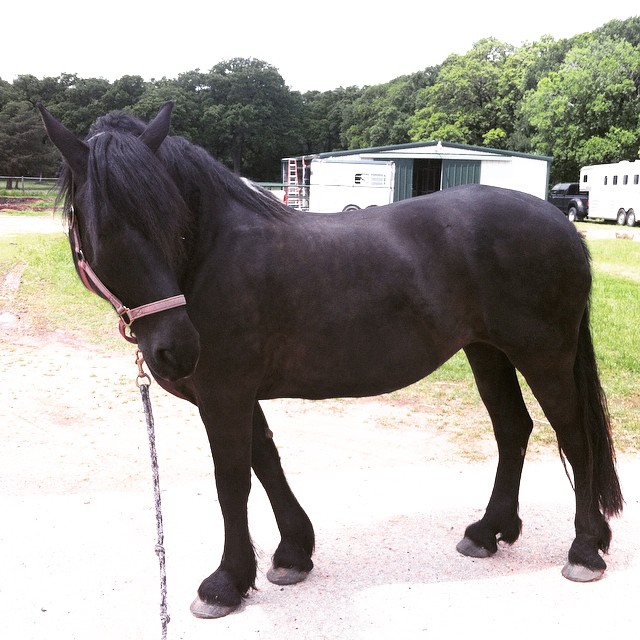 c) her butt is finally muscling up and her topline is filling in. 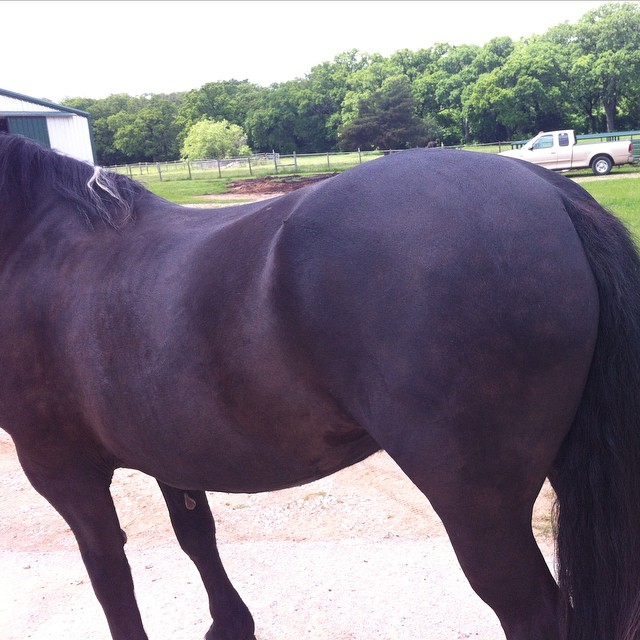 She wasn’t the most cooperative with this endeavor, but you get the point.

——–
Sunday was designated “you will ride your test” day.

Our warmup was kind of random and fun, as we were working around some jumps/poles and a lesson. Once all of that was put away, another boarder was kind enough to video tape the test.

The test was…not great. I should have spent some more time getting her soft in the bridle before I started, but lesson learned.

Things that happened (or didn’t happen?):

-Was not through for pretty much all of the trot work (shoulder-in may be the exception) –All of the half-halts in the world couldn’t fix this. I tried. I really need a lot of bending lines, voltes, etc to “fix” this and unfortunately, you don’t get to do that in the middle of a test.

-Medium? What medium? (The canter had a bit of a lengthening to the left, but not really to the right. And there definitely was no medium trot)

-Both left lead canter transitions she initially picked up the right lead. Apparently there are downsides to doing counter canter work.

-She kept spooking (evasion spooking, not “I am actually scared” spooking) at the video camera, and then also at random things we’d ridden by all day. One of these resulted in her breaking in the counter canter (but picked it right back up!), another didn’t set us up well for the corner/shoulder-in and the corner/diagonal.

-Simple changes were ugly. She fell out of the canter both times and kind of bulldozed back into it.

Anyway, this is our baseline, and despite all of that – it’s really not a bad one to have, because everything is RIDEABLE.
-In general, I do not feel like I have to ride every canter stride like hell. The counter canter bit is the exception- I HAVE to keep her together from the first stride of that diagonal or it falls apart. AS LONG AS I keep the canter together and really push her down the straight line she keeps it. We did have a bit of a lengthen we had to collect back up and this was doable. 10 meter canter circles were a push but I actually felt like her left lead circle was better.

-As usual, keeping her on the bit is key. I need to play with warm up/break/picking back up a little to see how quickly I can get her back on the bit. Our strategy at past shows has been warm up and do not let her down until free walk (and/or stretchy trot, whichever comes first) in the test. Historically, she will take forever to get back together if she’s let down in the warm up. Or really in any ride – it’s not just a show thing, if she’s given a big break in a lesson or a ride we run into the same issue. This has become less so as she has developed more self carriage, but apparently it’s still a thing I need to take into account. –Horses that people warm up and then just free walk around, or stand around waiting for their turn in the ring on a loose rein? Not Cho’s thing.

-After the frustrating test, she did not halt and stand on the CL, so I was like “then you have to work!” and cantered off into these really lovely 10m circles, transitioning to a GREAT collected trot. It was everything we needed in the test. *headdesk*

Training things for the next few weeks:
-Continue to work on counter canter, but spend a little more time on the left lead in true and counter, since right lead is preferred right now. She’ll always have a preferred, but since they switch (it was the other way in February) I am going to try and get them as equal as possible.

-We need a defined, predictable medium in both gaits. I would REALLY like a solid medium trot because I feel like she could really shine here and it could be a good movement for her. I am not as concerned about the canter. I will probably ride that a little more conservatively, as I want to make sure I can collect her without breaking.

-Continue to hammer home centerlines and what is and is not appropriate behavior (ohhh mare).

Tonight I plan on doing transitions before/after cavaletti and maybe give the walk pirouette/medium trot down the long side exercise another go. I’m not sure what other exercises I can do within the arena to work on this lengthening business. It’s been too wet to ride outside, but maybe if I get there early enough tonight I’ll have enough light to try out in the field.