While Cholula is still potentially stiff, it seems this week there is no irregularity in her gait. I intend on having the vet come out, do some a baseline exams and perhaps get xrays to see if we’re dealing with arthritis and whether or not something like Adequan would be beneficial, but I’m hopeful since she seems to have improved.

We walked for an especially long time in the arena on Saturday, and there was a definite shift in her willingness to go forward. One minute I felt like I was still pushing too much, asking too many times, fighting, and the next she was marching forward and doing the things I asked. This makes me think physical.

Unfortunately, we had this same conversation at the trot, and once again if I get after her about her lack of pinging off of my leg, she backs off even more.

…, but instead I took a deep breath, brought her down to a walk, and asked again. At least a couple of times of this exercise, followed by more transitions, and we are on the same page. Usually.

And most importantly, the good spurs should be arriving in the next week. I ordered the smooth rowel spurs from Dover, and instead they sent me these huge smooth rounded knob spurs that I’m sure Cho was laughing at, miles away. I brought them in for an exchange, so hopefully they will be here soon!

I’ve been riding her with standard straight spurs since the move, and while it didn’t seem to matter for the first few weeks she is just…not responding to them. I never had this issue with the smooth rowels, and I rode with them more often than not. Just having them on made a huge difference.

And so on and so forth. Magic.

Once she knew they were there I rarely had to use them during a ride.

I could also ride her without them just fine, though they’d have to come back after a time for a reminder. These spurs are pretty much THE reason we’ve been able to show, and I was not allowed to wear them until I had control over my legs and could use them purposefully every time. Different things work for different horses, and this was the magical key to unlocking Cho. And not having a horrifically embarrassing test every show. (Seriously, there is video evidence of the most painful training level test you have ever seen).

So why I thought I could do without them and just ride with these straight spurs nobody knows. There is a reason my trainer had me using the smooth rowels.

Also, I’ve been assigned driving reins for the next while since it seems she’s still kind of bridle lame, off and on, and that’s usually because my hands suck.

I need riding bootcamp, badly. Lesson this Saturday – here’s to hoping we get back on track.

Sunday was a nice long walk in the PASTURE THAT WAS ACTUALLY DRY ENOUGH TO RIDE IN FOR THE FIRST TIME IN WEEKS. After awhile, Cho started really stretching down over her topline. We went up and down the (slight) hill, lots of big circles and just keeping that contact, her chewing, stretching out, using herself.

—Once she is propelling herself forward at the trot, she has been actively seeking out stretching work. I have to play this carefully as she can get into periods of curling, but as long as I’m aware of it and keep driving her back to front it’s not too big of an issue.

It’s about an hour round trip and I didn’t make it out early enough to turn her out for awhile and leave, so I sat on a bucket in the sun for an hour, read a book, and let her graze and move and stretch before our ride. Bliss. 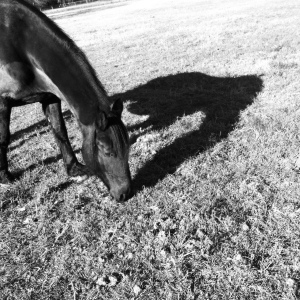